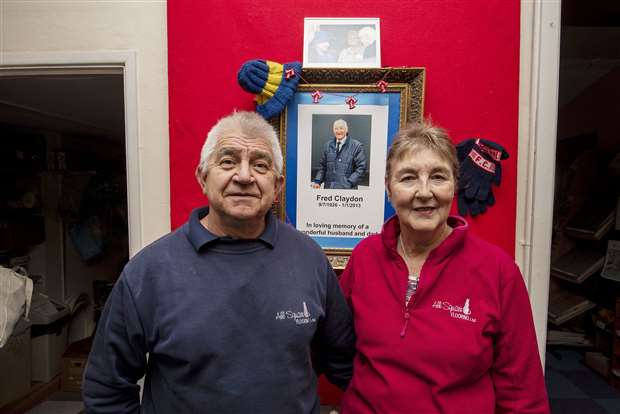 All Square Flooring on Old Station Road has been run as a family business by husband-and-wife Chris and Christine Beard for over 30 years. The couple have decided to retire, and the shop will close at the end of January.

The company was originally founded by Norman Mayes in 1961. Christine’s father, Fred, bought the business in 1982 and Christine joined him in 1989.

“My dad’s secretary retired after many years, so he said, ‘do you want to come in and join the company? I jumped at the chance, not realising all that was involved!” said Christine.

Christine thoroughly enjoyed working with her father who was well known in the town. Fred was a long serving member of the Royal Air Force Association, the local swimming club and the town’s chamber of trade.

In 1997, Christine’s husband, Chris, decided to leave the Navy and join her at the company. The couple’s favourite part of the job is interacting with the customers that they have met over the years. Many of their customers have returned and bought the next generation with them.

“Our last customer, because we've stopped taking orders now, came to us when her daughters were probably about three or four. Now they're at university, so it's the continuity really,” explained Christine, “I've worked with the parents and then seen the children come in years later. It's a lovely trade to be in; it's so nice to have customers that you've seen over a long period of time.”

Chris and Christine have seen many changes in the industry during their career, including the quality of products improving and changing. Christine explained that the variety available to the customer has increased dramatically with lots of colour choice and vinyl flooring options.

Some favourite memories of All Square was of fitting safety vinyl in a laboratory in Uganda for the MRC, working to combat Aids and installing flooring in the Queens W.C. up at the racecourse.

“We once went to Paris [to install flooring] and we were around the Arc de Triomphe. There was this bloke on a motorbike who shouted out in a really British accent, ‘you’ve come a long way to put down carpet!’ And that really made us laugh,” reminisces Christine.

The pandemic was a big influence on the couple deciding to retire.

“The pandemic really makes you rethink your life. We're so lucky to be able to sell it [the business] and be able to retire.”

The couple would like to thank all of their customers over the years, as well as the fitters and suppliers that they have worked with.

Christine would like to add that they have 60 years’ worth of stock selling for less than cost prices, plus cat items, clothes, books and much more that all need new homes before they close up.

All Square Flooring will be closing from 26th January 2022.

Back to All News
Search for Members